Experiences of Participants of Bullying in Sport

Athletes far more frequently suffer from their team or group (in individual and duel sports branches) than from opponents. Persons named as bullies of athletes include coaches and other persons working with athletes, referees, and spectators. This is shown by the results of the study conducted in Lithuania in 2019. Several fragments of this study are provided below.

Out of 1440 athletes surveyed, slightly more than a quarter (25.9%) identified themselves as victims of bullying initiated by the members of their team/group. Almost 30 per cent of athletes had witnessed bullying, and 15 per cent confessed that they themselves had bullied.

However, the prevalence of bullying varies significantly across groups of sports branches. For example, nearly a third of the research participants from the group of team sports identified themselves as victims of bullying, which is significantly more than the combined results of the other two sports groups (Fig. 1). 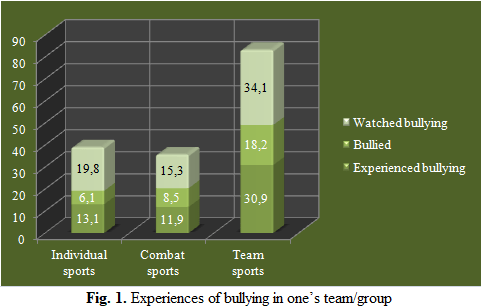 Again, when comparing groups of sports, team sport stands out. In this case, slightly more than thirty per cent of athletes admitted to acting unethically against their opponents (Fig. 2). 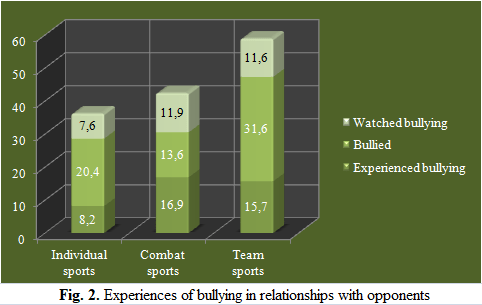 The prevalence of bullying depends not only on the kind of sport. Certain differences were also noticed in the behaviour of athletes of different genders. Almost a fifth of males, which is almost three times more than females, have attributed the role of the bully to themselves while bullying both their team/group members and opponents. Males became victims more often too: they suffered twice more often in their team than from opponents. Whereas, for example, in the females’ group, the difference between those who suffered from opponents and the ones who suffered from their team/group members was not significant. 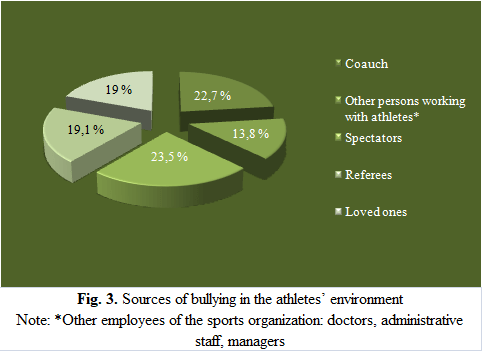 Athletes also named other persons who caused suffering to them. Among these, athletes most often mentioned coaches: physical or psychological violence in coaches’ actions was perceived by nearly a fifth of athletes. Almost as many athletes identified spectators as the source of bulling; almost a fifth, referees and their loved ones (Fig. 3).

The results of interviews with athletes showed that certain physical and emotional violence was perceived as an integral part of training. Here are some excerpts from the informants’ stories:

“<…> What I experienced most is that Soviet thinking of coaches themselves, as I said here, humiliation, total belittling… motivation is increased in the opposite way: by ruining, literally saying that you can’t, you won’t do ever, you, of course, I am saying, with all those swear words.”

“There has been a lot of bullying, especially because of weight, because we are anyway grouped by weight category, and the bigger you are, the more it is necessary  to bully, that you are fat, and they don’t care that you are a Lithuanian champion, you will anyway remain such or of that kind …”

“<…> I would see that this was happening everywhere, that it seemed an absolutely normal thing, I would see that manner of training all over Lithuania, the same… We gather to the competition and hear all coaches shouting all those words at those children … It seemed , practically, as if it were normal.”

“Continuous hammering into the head that you won’t do anyway and knowing that most often I finally fail. Let’s say I know my mistakes myself, but when the coach comes and casts a slur on you, I would somewhere already know before the start that it would be bad anyway.”

In other words, it is believed that bullying motivates to achieve better results. All of it becomes an experience that is passed down from generation to generation. That is, athletes who later become coaches continue to use the same methods, and they are more likely to justify not only their own but also other athletes’ violence.